Microsoft’s got a pretty stellar track record of terrible Windows infomercials. Some for the consumer, some internal, all pretty rough. This 1988 video showcases Windows/386, a fairly impressive upgrade to Windows that introduced multitasking among other features. The impressiveness of the upgrade does not come through in this video. What begins as a dry-but-corny corporate…

END_OF_DOCUMENT_TOKEN_TO_BE_REPLACED

Freddy Krueger’s always been his own best pitchman, both in his filmic universe and in ours. He’s got this unflagging confidence that only breaks – at most – thirty seconds before he’s defeated, and that confidence rings as clear as a bell as he breaks the fourth wall to sell his movies to the real…

END_OF_DOCUMENT_TOKEN_TO_BE_REPLACED

The idea seems like a 7-year-old’s fever dream: strap trampolines to your feet and then you can get trampoline-air anywhere you go for the rest of your life. That’s the promise of Moon Shoes, the brightly colored ankle-breakers of the ’90s. To be clear, the shoes are a terrible idea; apart from the aforementioned risk…

END_OF_DOCUMENT_TOKEN_TO_BE_REPLACED

Most VHS games come off as less than they intend to be, but watching this VHS presentation of 1992’s “Nightmare” I can’t help but catch a chill. Nightmare’s a 3-to-6 player board game fueled by the Gatekeeper, your host on the VHS tape. Unlike other VHS board games where you fast forward and rewind to…

END_OF_DOCUMENT_TOKEN_TO_BE_REPLACED 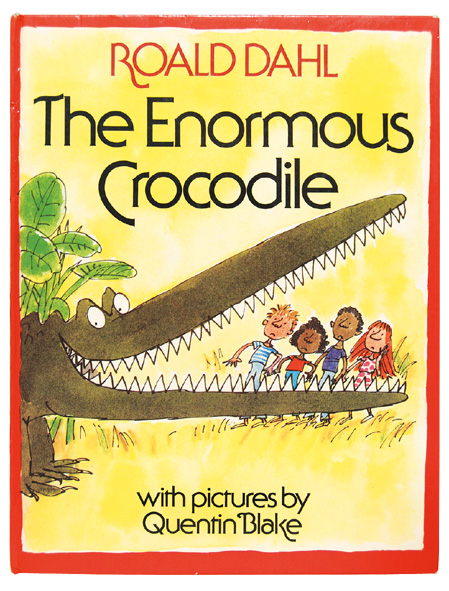 September is Roald Dahl month! I have no idea who proclaims these things, but I’m more than happy to celebrate.  Roald Dahl was one of my first favorite authors that I can remember.  We had an old hardcover edition of Charlie and the Chocolate Factory growing up, and I can picture the tattered book jacket perfectly as I’m typing this.  As a kid, I really enjoyed how Dahl’s books would respect children enough to be able to handle their sometimes dark subject matter. It’s definitely something that has stuck with me, and influenced my recent attempts at writing for children.

While both Charlie books, The BFG, and The Witches were among my favorites, my absolute top Dahl book is one that I don’t see enough people talking about: The Enormous Crocodile.

It’s about this crocodile that goes around the jungle bragging about how he’s going to eat children, even though all the other jungle animals try to convince him that its a bad idea.  He keeps trying to eat kids, and the jungle animals keep saving them.  Finally, an elephant throws him into the Sun! (Spoiler alert). I think I was the only kid in my elementary school that checked this book out, and my name was printed all the way down the checkout card tucked into the cover.

Did you grow up on Roald Dahl books? What were your favorites?

Happy Roald Dahl month! Join the celebration (and the 50th anniversary of James and the Giant Peach) on his website!